The Film and Television Institute of India (FTII) was set up by the Government of India in 1960, in the premises of the erstwhile Prabhat Studios in Pune.

The FTII Campus currently stands on the grounds of the erstwhile Prabhat Studio. Prabhat Studio was a pioneer in the business of filmmaking and shifted to Pune from Kolhapur in 1933. The archaic studios of the time, which were the production grounds for the films of Prabhat are still present and are being used at FTII. The old Studios of Prabhat are now heritage structures and FTII students continue to work at the world's oldest functioning film shooting studios.

The Legacy of Prabhat Studios

The present-day FTII campus was initially a land bought by the Prabhat Film Company way back in the year 1933. The company was founded in Kolhapur in 1929 and moved to Pune 4 years later. A stellar and pioneering film company of its time, it produced several important and iconic films such as Shejari, Sant Dyaneshwar and Sairandhri, which was the only colour film made by Prabhat. Such was the legacy of this iconic studio, that at the time, it was the biggest film studio in Asia! The productions made by the Prabhat Film Company in its heyday included 45 films made in both Marathi and Hindi languages.

The Film and Television Institute of India (FTII) was established in the year 1960 and was formerly known the 'Film Institute of India'. It was a department of the Ministry of Information and Broadcasting of the Government of India.

In 1971, FTII came to be known as the 'Film and Television Institute of India' (FTII) and soon started in-service training programs for Doordarshan, India's public broadcaster. The Television Training wing, which was earlier functioning in New Delhi, shifted to Pune in 1974. Thereafter, the institute became fully aided by the Ministry of Information and Broadcasting.

Along with the name change, FTII became an Autonomous Society under the Ministry of Information and Broadcasting, run by a Governing Council and its appointed Director. 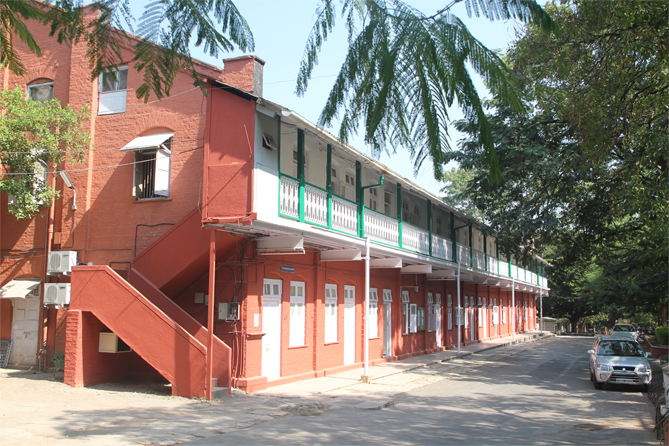 Today, FTII is recognised as a centre for excellence in audio visual media across the world and one of the best film institutes in India. Our alumni work everywhere: from Los Angeles, Paris, and London to Mumbai, Hyderabad, Trivandrum, Chennai, and Kolkata. They have gained popularity and have earned various laurels as accomplished technicians and superstars. The alumni have also won popular film and television awards from the ‘National Film Awards’ to ‘Oscars’, to the ‘Dada Saheb Phalke award’ to the prestigious ‘Padma Awards’.

From its original five courses, FTII has grown to offer eleven full-time courses in various disciplines of film and television as well as a host of short term courses. These courses are held on-campus in Pune as well as off-campus at across centres all over India.

Places of Importance in FTII

The Shantaram Pond is a tank-like structure that had been constructed by the Prabhat Film Company in order to facilitate the filming of various scenes. Although it is mostly empty, water can be filled through a valve-like mechanism that has been installed in the tank. The entire atmosphere, the quietness, and the beauty are truly indescribable. One has to see it to believe it! The pond has been named in reverence of the historic film director V.Shantaram, who would sit here for hours and ruminate. 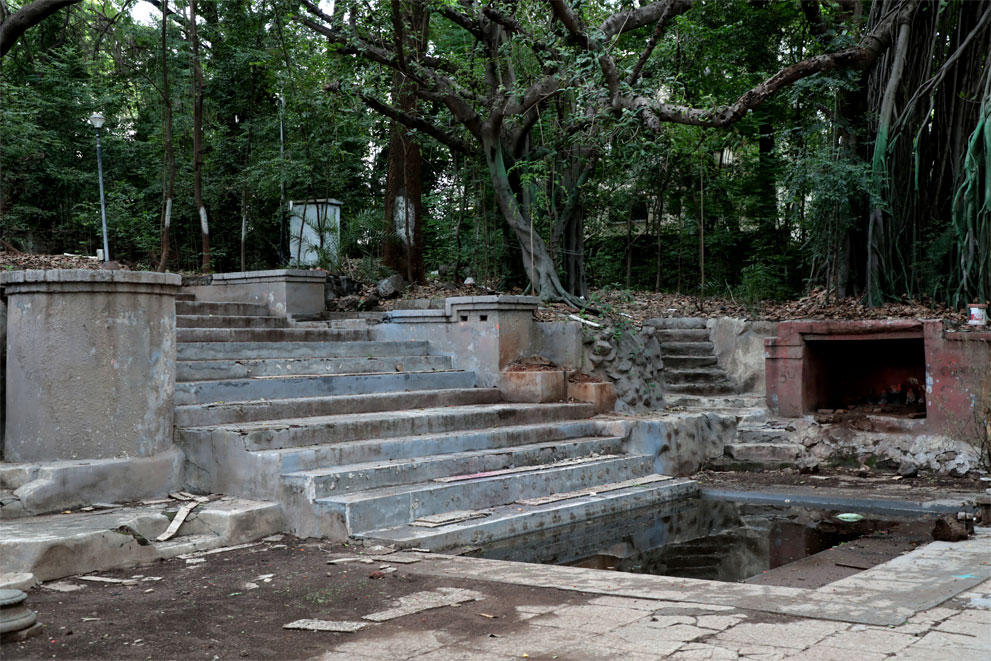 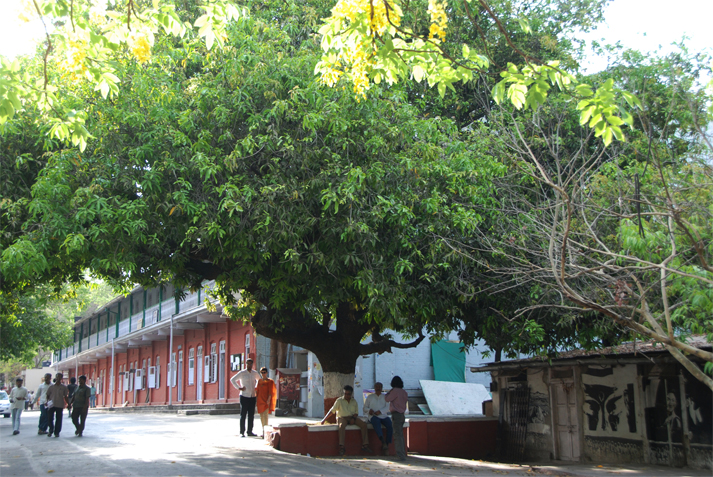 The Wisdom Tree inside the campus of FTII almost has a mythical quality about it. It is a place that all students seemingly gravitate to without any protocol or a purpose. Stories say that many great filmmakers and artists of the time have given wisdom and life lessons beneath this very tree. It has become a point of conversation, music, intellectual discussions and casual rendezvous over the past many years and still continues to attract them with its historical pull.

Hidden behind the foliage and thicket on the campus of FTII lies a dome that had long passed from memory of the many students and faculty that walked through the institute each day. This dome, was in fact a fully functional sound reverberation chamber built by the Prabhat Film Company way back in the year 1932-1933! The staff’s research has shed light on the fact that the chamber was used in the film Sant Dyaneshwar (1940) directed by Vishnupant Govind Damle. 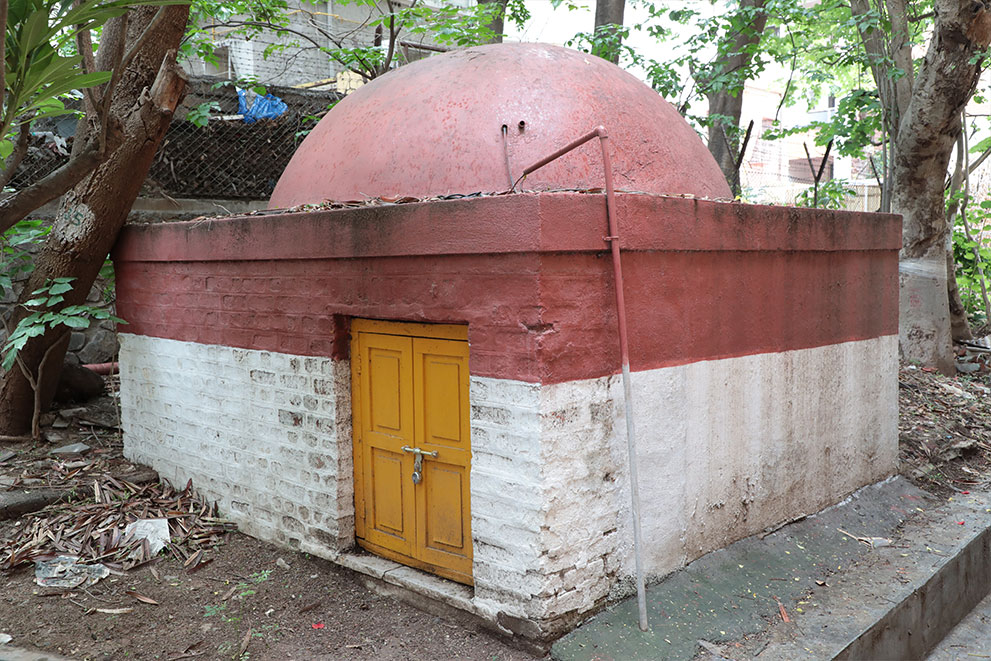 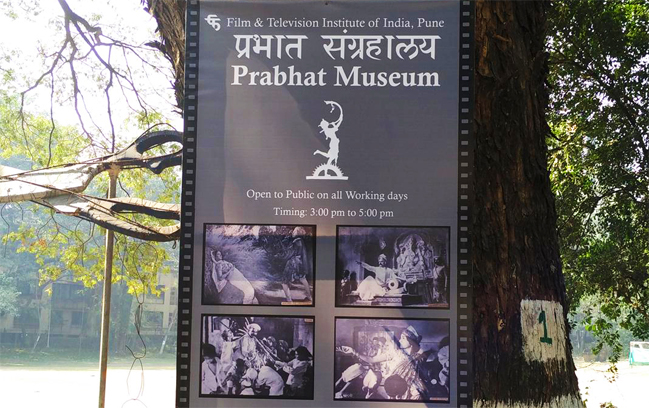 The Prabhat Museum traces its origins back to 1995. The collection includes artefacts and pictures handed down to the institute by the Prabhat Film Company. It includes the ancient jewellery, props, pictures and even costumes worn by the stars of the era. Walking through it is like sifting through the pages of history.